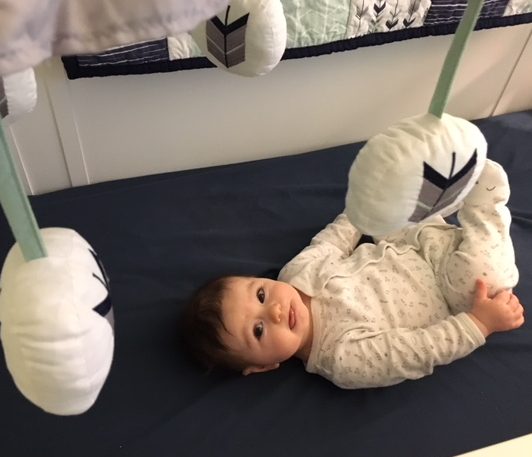 Last month he was sleeping through the night and now he is awake every two hours! What is going on? Is he teething? Does he have a bellyache?

Sleep regression is a common thing for most babies at different points throughout the first two years! He has so much to see and explore during his awake hours and he is learning so many new awesome tricks it is hard to shut off his mind and rest. He wants to play!

He may be also fighting naps, making him extra tired and difficult to settle at bedtime.

The first sleep regression typically occurs around four months when she is no longer a newborn and simply does not require as much sleep as a newborn. Newborns fall immediately into a deep sleep state. Four-month-olds are starting to sleep more like adults, but her sleep cycles are only 45-50 minutes long, compared to adult’s 90 minute sleep cycles. At this point, her sleep habits are simply maturing and she is adopting a new schedule.

Around eight to ten months babies sometimes experience another sleep regression. There is a lot of brain development taking place during this period and it is harder for him to settle down, especially when there is still so much of his little world to explore.

Sleep regressions typically last three to six weeks, so if you are patient, she will eventually get back on track.

Some ideas to help: